Flip through a bushfoods classic like Issac's Bush Food or Cherikoff's The Bushfood Handbook and you may be left with the impression that pickings are slim in the southern half of the nation. With increasingly limited rainfall and frosts to contend with, attempting to grow native food plants in southern Australia may seem like an unlikely proposition. Not so! A number of South Australian growers are successfully cultivating a range of plants traditionally associated with rainforest regions and/or high water requirements.

One such grower is Warren Jones, of Tumbeela Native Foods in Verdun, South Australia. Situated in the western Mount Lofty Ranges, this area receives approximately 800mm of rainfall a year, higher than the Adelaide Plains, but in a different, and more variable, pattern than the eastern states. Further, this region is subject to some blinding, dry heat in summer (in excess of 40oC) coupled with frosts in winter. At Tumbeela, however, Warren has successfully established a number of rainforest bushfood crops including lemon myrtle (Backhousia citriodora), and riberries (Szygium leuhmanni). Growing amongst these is a significant number of Tasmannia lanceolata (mountain pepper).

With the plants now in their eighth year, Warren has been happy with the yields so far and supplies his produce to some of Adelaide's top restaurants, food processors and local businesses. Farm gate sales, gourmet stores and a presence at local markets service the retail sector. Warren also takes his role as an educator seriously; taking the time to discuss his products with customers and leading tours around Tumbeela for interested groups.

However, the winter of 2006 brought some punishing weather to the Adelaide Hills; rainfall was slight and some devastating frost appeared to decimate some of Warren's trees. While the mountain peppers took the sharp burst of the Tasmanian weather in their stride, the lemon myrtles suffered greatly, far more so than the riberries and aniseed myrtles (Anetholea anisata). It was a truly dismaying sight. By the time the worsts of the frosts were over, Warren had discovered that not only the outer leaves been burnt away, but that the inner 30cm of each lemon myrtle was severely damaged also. Without any information on how to rescue his crops, if in fact this was necessary, Warren could only wait and see how the plants coped with their climatic beating 1.

It was worth the wait! With the warm spring weather, although still little rain, all of the lemon myrtle trees have bounced back in unbelievable health. The frost damage has dropped away and appears to have acted to self-prune the trees. New growth is prolific, with the lemon myrtles growing back into dense, verdant forms.

So good news, southern growers of bushfoods crops! If trees are protected when young, and Warren recommends the use of robust plastic cones over seedlings, established rainforest plants are able to survive unusually harsh weather conditions. Not only this, they seem to thrive from the shock!

* Hardiness: usually described as frost-sensitive. Protection is recommended for younger plants but as Warren has found, established trees appear to cope with heavy frosts quite well (after temporary damage).

* Uses: lemon myrtle is a versatile lemon flavouring. Use either the fresh or dried leaves as a substitute for lemongrass in Asian dishes or steep as tea. Lemon myrtle is also great in sweet dishes, such as cheesecake and puddings.

* Habit: a taller tree than B. citriodora; up to 25m in ideal conditions but more like 10m in cooler climates.

* Aspect: as for B. citriodora: requires warmth and well-drained soil, sun to semi-shade.

* Hardiness: again, aniseed myrtle is usually described as frost-sensitive however Tumbeela's established plants didn't appear to suffer as greatly as B. citriodora during the recent frosty winter nor have they experienced the lush new spring growth of the affected trees.

* Uses: as for star anise in Asian foods, marinades for meats or seafood, or steep as tea.

* Hardiness: can tolerate mild frost once established, but protection for younger plants in advised. Warren reports that his riberries didn't appear to be severely affected by the heavy frosts this year.

* Uses: eat fresh from the tree! Also, riberries are great in desserts, jams and puddings. Try in savoury dishes such as dressings and sauces for grilled meat. 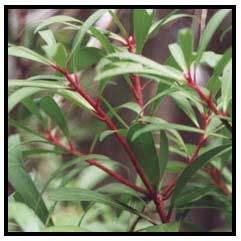 * Uses: Both the berries and the leaves of mountain pepper can be used in place of common black pepper, either fresh or dried. However, use judiciously! The heat of just a few mountain pepper berries can be quite over-powering. Mountain pepper is an excellent seasoning for native meats.

* Tips: Home gardeners need to be aware that native peppers are dioecious and both a male and female plant is required for fruit (berry) production. The leaves from a single plant can be used as a spice and the species is easily propagated from cuttings.

1 Growers may be interested to know that Agrobest Australia Pty Ltd produces a frost protectorent and anti-transpirant called Envy. A water emulsifiable polymer, it is claimed that Envy can increase frost tolerance by up to 4oC, however neither Warren nor the author have experience using this product.