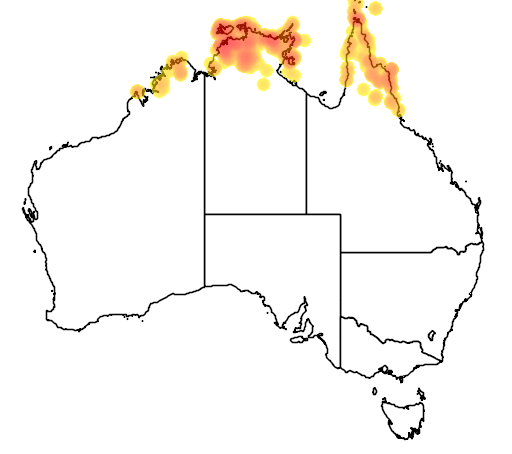 Driving through the woodlands of Cape York, the top end of the Northern Territory, or the Kimberleys of Western Australia, a traveller can't help but notice the beautiful lime green leaves of a large spreading tree. The tree is Syzygium suborbiculare, often described in books as the Red Bush Apple or Forest Satinash, but more commonly known as the Lady Apple.

This tree is one of the lilly pillys in the family Myrtaceae, but, unlike most lilly pillys, it is not an inhabitant of rainforests. It has large, broad, leathery leaves (suborbiculare literally means "almost round", referring to the leaves) and a flaky bark. An unusual feature of this tree is that it has a lignotuber: an underground storage organ which allows it to regenerate following fire or being chopped down, much like a eucalyptus tree.

The Lady Apple can be seen as a large spreading tree up to 12 metres in height, or a low gnarled shrub in exposed coastal areas. On the sand dunes around Cape Flattery it even occurs as a spreading prostrate scrambler, growing side by side with the famous prostrate variety of Grevillea pteridifolia. The flowering period is from July to October. However, flowering gets later in the season the further south you head from the tip of Cape York. The flowers are huge white brushes of long white stamens, which are short-lived, but nevertheless very spectacular.

The fruits (which are ripe October-December) have to be the biggest attraction. In harsh, windswept areas the fruits are not much bigger than 3cm in diameter, but under the right conditions are nearly 10cm. They are a dark, blood red in colour and strongly ribbed, unlike most lilly pillys. The flesh is firm and crunchy and can easily be broken away from the single large seed. The flesh has a sharp pleasant tang and is greatly revered by all bush travellers who know it. Apart from eating huge numbers of fruit, Aborigines are known to use the fruit for colds and chest congestion and squeeze the juice and pulp into their ears to relieve earache.

Because of its ability to tolerate salt spray, drought and fire, while giving good shade, beautiful flowers and exquisite fruit, I believe this tree should be seen more often in cultivation, especially in the dry tropics.

(Reprinted from "The Native Gardener", Newsletter of SGAP Townsville Branch)